October 9, 2014 – The Record
2014  K-W Oktoberfest Rogers Women of the Year Awards
The WRDSB Spec Ed Choir was the recipient of the Group Achievement Award for their contribution and service to the life of our community. 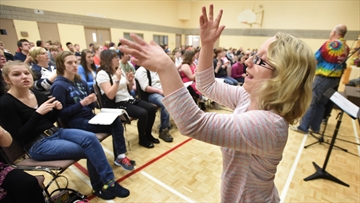 September 25, 2014
KW Habilitation Grand Opening
The Choir was honoured to be asked to perform at the Grand Opening of KW Hab’s new facilities. Several of our choir members are also KW Hab clients. The weather was perfect, it as a great afternoon to sing in the sunshine! Our 2010 Gala featuring both music and drama was a big hit.